Malta: An Astonishing Mixture of Worlds

- July 03, 2017
As we land from rainy Brussels in Malta, the pilot is cheerfully announcing that there is zero wind outside. We are excited until the heat wave hits us when going out of the plain and I immediately start sweating, almost missing Brussels' fog. Luiza and I reunite with Dori at the airport and we head to Floriana.

Malta is indeed an astonishing mixture of worlds. It's fascinating how such a tiny island is home of Arab and Western world, of old and new times - and everything seemingly inhabiting the same space happily and peacefully.

(Note: It so happened that I was too relaxed in the sun and did not take a whole lot of photos...)

A"personal driver" with a dodgy car picks us up from the airport and brings us to the apartment in Floriana, which funny enough is a town 10 minutes walking from the center of the capital, Valetta. Cars in Malta are quite oldish, not the cute fancy retro style, but rather...just keeping driving beyond their age. One almost feels like in Cuba. Our driver Victor is incredibly sweet, funny and polite person BUT he wouldn't stop talking. In 20 minutes he tells us about the history of Malta, the political situation, the tourist sites, the public transportation. He is so much into his script that it doesn't even matter whether we interact or not, he wouldn't notice anyway.
Main conclusion: traffic in Malta is absolutely insane, it makes no sense to me and I refuse to ever understand it or actively participate in it as a driver.

Our apartment is by the St. Publius Cathedral. Victor proudly announces that in front of the building there is the "largest open space venue" in Malta where apparently all big pop stars come to sing (in reality - approximately the size of the Grand Place in Brussels...). As we enter in a street still covered in plastic cups and straws from a few days ago, we find out we had (luckily) just missed the biggest MTV concert...

Crossing streets in Malta is not a straight forward act. As we head to the beach at Golden Bay, it takes us like 15 minutes to figure out how to cross (lame, ok). There are literally zero pedestrian crossings and not any sign of such, until we run into an underpass called a "subway". Maltese buses are unpredictable, sometimes they come, sometimes they don't, sometimes they drive you where announced, sometimes somewhere different - it's like a rollercoaster. What is funny to observe, though, is that people remain super chilled, they quietly wait and hope to arrive where they need, no stress whatsoever...life on an island. 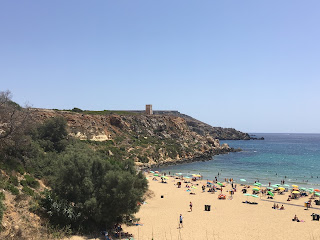 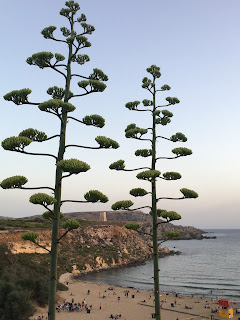 The Golden Bay is a beautiful sandy beach surrounded by rocks, peculiar palm trees and plenty of cacti. The bars on the beach are staffed mainly by Macedonians and some Serbians. A Macedonian bartender and I speak in Macedonian-Bulgarian and his little brother asks me if I wanted to marry the older one, clarifying that it's for love and not at all for the EU working permit! (worth clarifying cause the guy is cute) 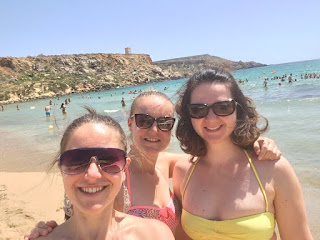 On the way back we grab a taxi, which is another hilarious experience with insights about life. The driver explains to Dori that in Hungary currently they have a very strong leader who "rightly kicked out the migrants, just like the Ottomans before" (!?), to Luiza that in Romania "they were very cruel and made a mistake killing Ceausescu", and to me that in Bulgaria the summer resorts "lacked class and were full of drunkards" . I make a friendly remark that he is quite a crazy driver hoping he'll tone it down. He dies laughing, accelerates the speed and comforts me saying that "in Malta there were no car accidents as people learned to drink and drive from a very early age"... fear not.

On the way to the Blue lagoon, the boat driver decides to go wild, too. This boat jumps so crazily that I start regretting I didn't call my mom in the morning.

The Blue Lagoon itself is simply divine with its turquoise waters but it is quite over-commercialized. It's a little too crammed with sunbathing chairs...even in the water. The little island is anyway impressive and worth visiting although not if one is looking for some peace and quiet.

Culture and cities: sweet Maltese people, sandy buildings and some laundry hanging from the balcony 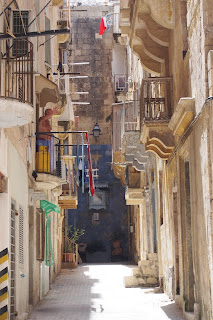 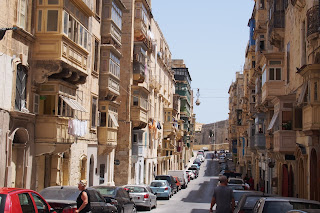 Valetta is so tiny but has so much to offer. While walking around one literally goes back in time. The buildings are all made of these sandy rocks that make it look like a fairy tale. While immensely picturesque, when I look more carefully, I can see that there are numerous cracks in the balconies, old dusty windows...as well as some old Maltese guys in their underwear, hanging their laundry above the tiny streets. The streets in Malta are absolutely unpredictable and Google maps turns out to be fairly useless a few times with some walls erupting here and there, or some non-existing bridges fading away. So we just let go of maps and wander around. 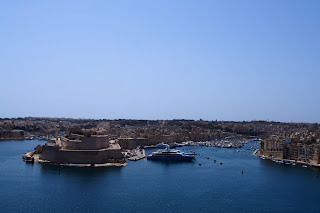 (Almost) all Maltese people are incredibly sweet. They so much want to help and tell us about their country, that we (almost) feel uncomfortable. They all speak perfect English with the cutest accent. The official Maltese language, though, is a unique branch of Arabic and the only Semitic language scripted in Latin alphabet. At the same time Malta is one of most religious countries in the EU with 90% of Catholic population. Divorce was only made legal 5 years ago in Malta and since then there have been around 15 divorces (!!). It is mind-blowing how many cultures are mixed to form this fairly homogenic and peaceful culture in Malta. 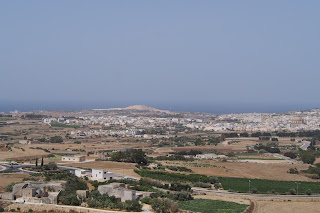 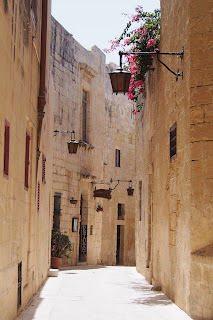 This little peace of land won my heart forever with its unexpected and exotic charm almost making us forget we were still within the boarders of the EU. And of course, it will forever remain the destination where we celebrated sweet Dori's 30th birthday, marked by a glamorous project of our Brussels group "Los Arritmicos" dancing Despacito in her honor :D 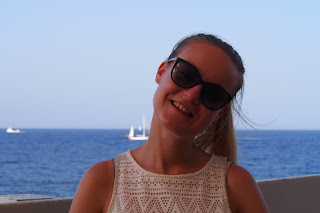 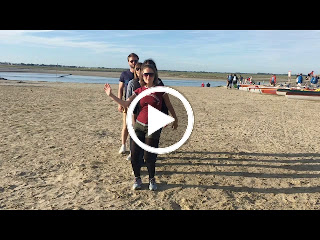 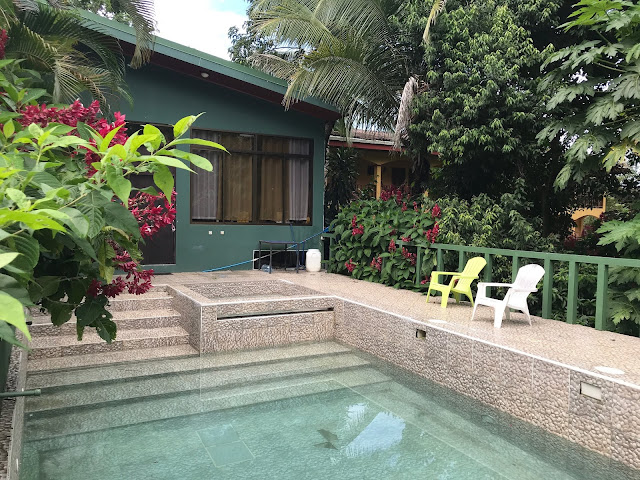 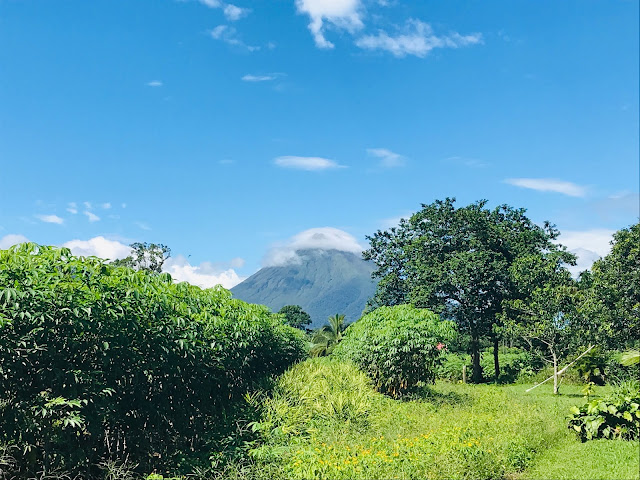 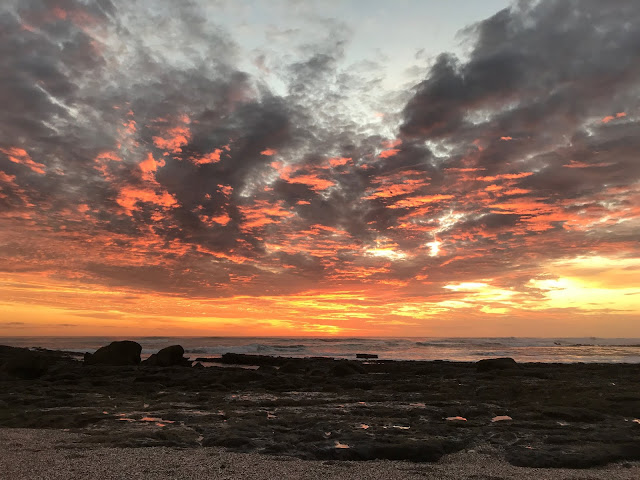