Showing posts from September, 2016
Show all

Conceptualizing Power and Care with His Holiness the Dalai Lama 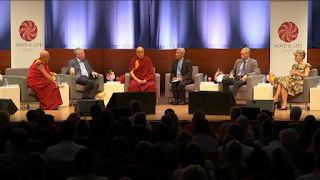 I have a long history of unconsciously pursuing His Holiness the 14th Dalai Lama.  When I was in high school (around 2005) someone had unintentionally left at home a book called "Siddhartha" by Herman Hesse. The book is a novel dealing with the spiritual journey towards enlightenment of a man during the historical time of the first realization of Buddha. I read it spontaneously and the concepts were quite distant to me at that point but without knowing I had opened the door to a life-long exploration of Buddhist philosophy.  I would do occasional readings on the topic in the years after, until I went to study at the University of Arkansas in Fayetteville in 2011 (no obvious connection with the Dalai Lama so far, I know). There I signed up for a course in Non-violent Politics, which was led by a brilliant American professor... accompanied by a Tibetan Buddhist Monk! We studied the political movements of Martin Luther King, Mahatma Gandhi and... His Holiness the 14th Dala
Read more
More posts